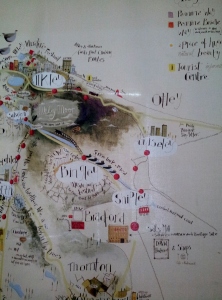 “We’re on the road to ‘nowhere'” feels like the Anthem for Leeds’ Local Plan when you take a look at it for our area.   So,  it is up to the Neighbourhood Development Plan to help turn that around and put us back on the ‘road to somewhere’.  For that we need your help.

The journey has started in some of the work the Forum has done already:  the Aireborough Festival, that looked at ‘honouring the past, valuing the present, and imagining the future’,  the photography of Darren Sanderson as he captures the local landscapes,  and the work that has been done by Leeds Conservation Officers who, with the help of local people like Aireborough Civic Society, Tricia Restroick, and Nigel Wilson,  have captured forgotten or unknown treasures like Nether Yeadon, or why Tranmere Park is there.

In addition,  we have people striving to put Aireborough on the map now;  Guiseley Football Club,  the Chevin Chase, and Guiseley Music Festival;  the hidden volunteers in local charities and friends groups who are building and restoring civic assets, such as Engine Fields, High Royds Memorial Chapel, Rawdon Library and Parkinson’s Park. 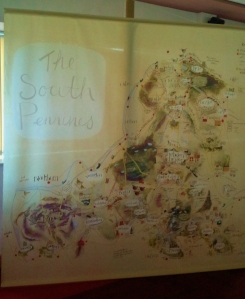 Distinctiveness Map of the South Pennines

Then, there is the past, which could be in danger of being forgotten, if it were not for the work of groups like Aireborough Historical Society who remind us of what has gone, but importantly what still remains.   The hidden becks,  the industrial remains,  the early medieval landscapes.

Aireborough is not ‘nowhere’,  it is ‘somewhere’ – and we want to  capture its distinctiveness on a map.   If Bradshaw were to write his railway guide today, what would he say on a visit here?   We have taken inspiration from the much admired map of the South Pennines, produced in the last few years, for similar reasons, and local designer Briony Sloan is putting pen to paper to translate ideas into reality.

So,  we need your help – we need you to brainstorm ideas of local distinctiveness and send them to us for consideration as features on the map.  Here is a ‘starter for ten’ to get you thinking, there is loads, loads more.   Please send your thoughts to aireboroughnp@gmail.com