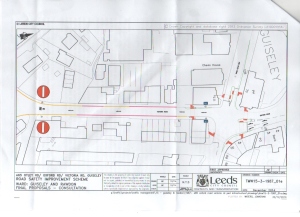 For a long time, the Station Hotel Junction has needed improvements. A scheme put forward in October 2014 was rejected by local residents and businesses, so Leeds City Council has now come up with another scheme – to make Victoria Road one way, and create a pedestrian island in the A65 outside the Station Hotel.

Residents and businesses in the Victoria/Cavendish Roads area of Guiseley have been advised that in the near future signage and notices will be erected to show that Victoria Road from its junction with Cavendish Road towards the Otley Road/A65 will be made into a one way system with access only from Otley Road.

Victoria Road will then have more car parking bays created making space for up to 23 vehicles, rather than the current 12.

In addition, by not having cars turning left at the traffic lights along Otley Road towards White Cross, a pedestrian island/refuge can be put outside the Station PH. The Council claims that “by the removal of Victoria Road from the traffic light sequence at the A65 junction there will be sufficient time within the sequence to provide a full complement of pedestrian facilities”.

The downside of the proposals is that traffic approaching the Station junction from Park Road, will have to find an alternative route either to the gyratory, or down Back Lane. Alternatively, Bradford traffic may go to White Cross and turn back along Otley Road, going either along Back Lane or Ings Lane.

The proposals have been discussed with and have the approval of Guiseley & Rawdon Councillors. However, they have asked for a trial of the system to gauge effects before permanent adoption.

Traffic surveys on the surrounding streets will be conducted during and after the trial to determine where displaced traffic has moved to and to ensure that no adverse issues are encountered. The results of these surveys coupled with any correspondence from the public in Guiseley will be used to gauge whether or not the trial was successful.

The trial will begin just as soon as the work is completed.

Should anyone wish to comment, want more information or require a plan of these proposals they should contact: Highways and Transportation for the attention of Mr J Waters. 0113 395 0654, or email jonathan.waters@leeds.gov.uk

You can also leave comment here, or email aireboroughnp@gmail.com, and we will return an aggregate view from the Forum.

This site uses Akismet to reduce spam. Learn how your comment data is processed.